Barcelona & Reykjavik, May 12, 2015 – Scytl, the worldwide leader in secure online voting and election modernization, announces the successful deployment of the first ever fully online residents referendum in Iceland. This first online referendum took place in the municipality of Ölfus with a participation rate of 43% of the municipality´s residents (age 16+), a clear demonstration of the possibility to leverage the online channel for more participatory, agile and secure referendums.

The online citizen referendum held in the municipality of Ölfus is the first of the future online referendums that will take place across selected municipalities in Iceland. As part of the country´s strategic initiative to create a more agile and participatory electoral process, Þjóðskrá Íslands (Registers Iceland) – the office under the Ministry of the Interior which among other things maintains the national register and authentication service for all citizens which was used in the election – began an online citizen referendum program aimed at streamlining the path to online voting in the country.

“The execution of the election in Ölfus was very successful and the participation was good. We are looking forward to working with Scytl on the second pilot election in a bigger municipality,” said Margrét Hauksdóttir Director General of Registers Iceland.

In general, the participation percentage increased in the older age groups, with the participation of men over 75 surpassing the 63% participation rate. Gunnsteinn Ómarsson, Mayor of Ölfus comments, “We were a bit worried about how the older people would feel about eVoting, but it turned out they were quite ready for it! This is an excellent way to consult the population quickly and efficiently.”

As ongoing experiences and reports around the globe indicate, the leverage of secure online channels has a positive influence in increasing citizen engagement. The recently published report “Effects of the Internet on Participation: Study of a Public Policy Referendum in Brazil” documents an 8.2% increase in total turn-out with the introduction of online voting.

The online referendum implemented by Iceland provides the highest security levels available today and ensures voter privacy, strong voter authentication, the integrity of the referendum results and voter verifiability and auditability. All while providing user-friendly and accessible voting for its citizens. In the case of the Ölfus municipality:

“Scytl is extremely proud of the opportunity to continue to support the enablement of a modern and secure electoral process in Iceland with our experience and state-of-the art online voting technology. Being selected by Iceland to support these initiatives as a flagship in global electoral processes once again reinforces our focus on increasing and improving participatory democracy, citizen empowerment and public transparency via innovative online technology,” concludes Pere Valles, CEO of Scytl.

Scytl is the global leader in secure election management, electronic voting and eGovernance solutions. Specializing in election modernization technologies, Scytl offers the first end-to-end election management and voting platform, providing the highest security and transparency standards currently available. Scytl has capitalized on its more than 18 years of research to develop election-specific cryptographic security technology protected by more than 40 international patents and patent applications, positioning Scytl as the company with the largest patent portfolio of the industry.

Scytl’s solutions have been successfully used in over 38 countries across the globe over the last 10 years, including Canada, the United States, Mexico, Ecuador, France, Norway, Switzerland, Bosnia-Herzegovina, the UAE, India, Iceland and Australia. Scytl is headquartered in Barcelona, Spain, with strategic offices in the United States, Canada, Brazil, Peru and Greece, as well as field offices in the UK, Ukraine, Mexico, Malaysia, India, Bangladesh and Australia. For more information, visit www.scytl.com. 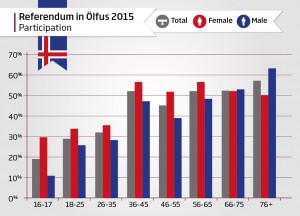